Like many com­men­ta­tors, I regard August 9 2007 as the start of the “Glob­al Finan­cial Cri­sis”. On that day, BNP Paribas declared that sev­er­al of its funds were being closed because liq­uid­i­ty in those mar­kets had com­plete­ly evap­o­rat­ed: 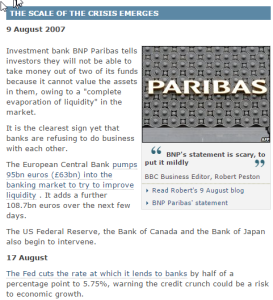 So I was par­tic­u­lar­ly amused–in a sick sort of way–to see this bril­liant info-graph­ic on The Fed on Twit­ter today: it plots the amount of laugh­ter in FOMC meet­ings between 2000 and 2012. “Peak Laugh­ter” occurred lit­er­al­ly days before the cri­sis began: 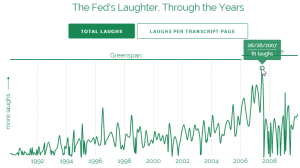 Laugh­ter, it is often said, is the best med­i­cine. But that’s only when you know what ails you. If you are guid­ed by igno­rance, as the Fed was (and still is) by main­stream equi­lib­ri­um-obsessed, non-mon­e­tary eco­nom­ics, laugh­ter is a sign of delu­sion.

The laughs plum­met­ed in the next few days–from eighty on June 28 to forty on August 7, and then just one on August 10, the day after BNP made its statement–as real­i­ty punched the FOMC in the guts.